Pink Flamingo Irrigation – The Story About 15 years ago, I installed my own sprinkler system, while living in Tampa Florida. I wanted to better understand how to take care of my own lawn, and make it beautiful. More and more of my neighbors would stop by in their golf carts wanting to know how did I get my yard so green? There are some …

Read more3 Ways to Keep your Sprinklers working, and Your lawn looking Great!

Ms. Joy had fold-up seats installed in the back where golf clubs would be carried so she could transport more people, and a special basket that clips in for her two small dogs.

If you live in The Villages, or are thinking about buying here, WATCH the video!

Original post by Village News A failed country club restaurant will close its doors this weekend in The Villages. The Hacienda Hills Country Club restaurant on Saturday will permanently close its doors. The restaurant was deserted Tuesday evening, with only a few people seated at the bar. This news follows an announcement earlier this month by District Manager Richard Baier that the Developer is offering the Amenity …

It all began as a mobile home park called Orange Blossom Gardens in the 1970’s.

Can we Golf in The Villages?

Is there other Stuff to Do in The Villages?

The Villages is a great story, so let’s start at the beginning, Here’s a look at the history of this great community.

Harold Schwartz, a Michigan businessman, began selling land tracts via mail order in The Villages area in the 1960s. He and his business partner, Al Tarrson, were forced to close the mail-order aspect of the business due to a 1968 Federal law banning sales of real estate by mail order.

Stuck with considerable portions of Florida land, in the early 1970s Schwartz and Tarrson began development of a mobile home park, Orange Blossom Gardens, in the northwestern corner of Lake County. By the early 1980s, the community had sold only 400 units. In an attempt to improve the business, Schwartz bought out Tarrson’s interest and brought his son, H. Gary Morse, on board in 1983.

Morse noted that the successful retirement communities (such as Del Webb‘s Sun City developments) offered numerous well-maintained amenities to the residents. They also had diverse and nearby commercial development. Morse began to significantly upgrade the development. Their sales improved in the mid-1980s. Schwartz began to buy large tracts of land in nearby Sumter and Marion counties for future expansion. In 1992, Morse officially changed the overall development name to The Villages. The development is still controlled in all major aspects by descendants of Schwartz and Morse. 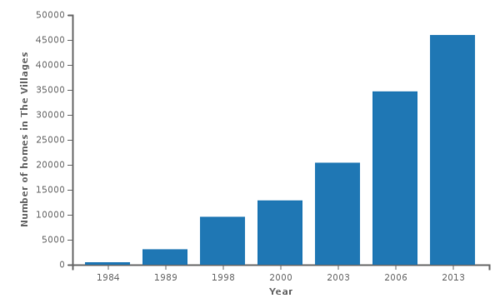 By the early 1990s, The Villages had more than 8,000 residents, three golf courses, the first Winn Dixie supermarket opened, just four restaurants, and nightly dances were dances held in a tent.

Commercial areas in The Villages include town centers, regional shopping centers and neighborhood retail plazas. The main business areas are the 500,000-square-foot town centers that feature a mixture of retailers, restaurants, entertainment and service providers.[35] The Villages has a total of 14 grocery stores including seven Publix, three Winn-Dixie locations, The Fresh Market, Target, Walmart Supercenter, and a Walmart Neighborhood Market.

In February 2019, WalletHub, compared the median credit scores of the residents in 2,571 cities and The Villages scored the highest in the United States with a credit score of 806.[38]

Read MORE about the History of The Villages

Read moreFacts, Figures and History, Living in The Villages

The cities on this list tend to be concentrated in the Southeastern United States. The Villages, in the #1 spot is no surprise…

Here is an article from Turbo Tax to help you figure out whether you need to file taxes while on social security.

The centerpiece of The Villages is its numerous assortment of golf courses. The ability to play “Free Golf for Life” is a key component of The Villages

Get FREE Coupons by Email!

Scroll back to top